This new freedom I have granted myself to write when I feel like writing instead of when the calendar says it is time, may to be a very handy thing to have during this isolation period. I am inclined to want to pity me for being stuck in the Tiny House when there are so many places I would rather be right now. But then it occurs to me: It would really be terribly self indulgent to complain. I have got a place to call my own and a dog that loves me unconditionally to share it.

When I am lonely, I have a television set that serves me comedy or drama on command. And when the days seem endless, I can brighten it up by indulging in so many gadgets. Of course, I do not understand how most of these gadgets works and I am still reluctant to connect those wonderful, fluffy white clouds in the sky with storage space in the sky deemed THE Cloud.

I no longer drive. My family finally won me over and I gave up my car…and of course, that $490 ticket I got helped me make up my mind. So now I Uber or LYFT anywhere I really want to be…except for right now when everywhere I want to be is closed.

What I do mostly right now is pick out a program on television that I really enjoy and watch it. Until I seen every single program in a series. I know I did not invent this way of viewing.  It is called “binge watching” (I keep up).

For me it all started with two of show business’ royalty. Jane Fonda and Lily Tomlin. I have watched – and mostly enjoyed – Frankie and Grace, And I have very definite feelings about both leading ladies. I think Lily Tomlin does a fantastic job as the nutter character, but if you watch too long at a time she gets to be a royal pain. But my complaint is with the writing, not the portrayal. I cannot believe that anyone as sensible as Jane Fonda would allow Gracie the freedom of her (their) home for so long. Because loveable as Lily is, she IS infuriating, and I have the feeling that Jane’s character would not welcome infuriating into her well controlled life. 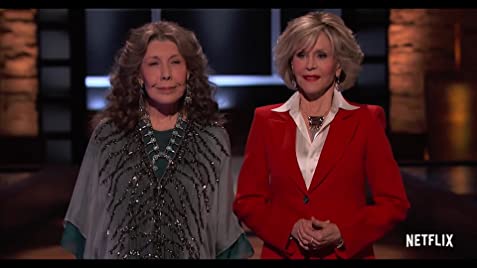 As for Jane Fonda’s character I must admit that I am lost in admiration for the bravery of the actress who loudly, and proudly, announces that she is 80, and, not satisfied with just saying so, reinforces her argument by peeling off all kinds of artifices she uses to maintain her perfection. Of course I console myself with the knowledge that, even after peeling all kinds of gadgets like phony hair and lashes, she still looks like Jane Fonda.

I notice this mostly in the Brit mysteries I watch constantly,. After a while, the lead character gives away his – or occasionally her – Tell. A twitch, a raised eyebrow, a request for “a nice cup of tea”. Whatever it is, that character will telegraph it if you watch long enough. It’s sort of sign language for “Gotcha!”

The problem here is that once you know it, it either increases your enthusiasm because you are now “on the same page” as the detective, or a page ahead of the script. One make you feel really smart, the other makes you feel impatient.

Oh, yes, directors have TELLS too. If , for example, early on, the camera lingers over an empty bottle or two empty glasses in a room for one, you can depend on it. Those are clues, and if you work at it, you will probably know the killer before the camera confirms it.

Okay, it isn’t Brain surgery but it IS better than spending your enforced time at home cooking stuff you shouldn’t be eating….like the fudge in my fridge. I swear I will give it away to the first person who comes to my door, whether they or not they want it.

4 thoughts on “Time On My Hands”