When I was a kid, and I’d choose to complain about something IMPORTANT that was missing in my life…like a chance to be a movie star or something equally available to everyone, my parents would drag out that boring talk of about “feeling sorry for the man who had no shoes until I met the man who had no feet.”

Since I never noticed if people wore shoes, unless of course, there was snow on the ground, and I certainly never knew a man who had no feet, I didn’t really care a whole lot about their plights, especially as it compared with the real life drama of my own depravations.

But three days ago I ran into a situation that was, to my mind, comparable to being the man who had no feet.

Back story here: I am having to make some life-altering decisions about what to keep and what to give, sell or throw away from among all the things I have amassed during my 91 years on earth.

The little statues of the Balloon people? Oh no, never. I couldn’t part with those because they remind me of a particularly tender moment in the lives of my daughter and my sister. Oh no, never.

But maybe the metal birds Celia gave me for Xmas? I could give them to Danny who has fewer “memory pieces” than the other kids. But no, they are my memory pieces, not Danny’s so that wouldn’t work.

Well, Anthony always admired the cabinet in the bedroom. I could give that to him to cherish. But he’s in Mexico. It would cost much too much to ship that piece. It weighs a ton.

And my dear John, the romantic in the family who collects family history things…like the mirror that needs resilvering that he prefers with its blurred reflection because it reminds him of all the family members, past and present who stared into its depth for reassurance before heading out to face the world. What more can I ask him to take in?

But how can I give these things away … give them to thrift shops to sell to people not even remotely connected to me…except through a mutual love of thrift shops maybe?

But the fact remains, that I have to unload a goodly portion of the things I have cherished for a number of years so that I can more comfortably move into a wonderful new tiny house that is being built for me by two of the world’s finest citizens.

I really did feel like the guy with no shoes. Well, not NO shoes. Actually there are 46 pairs of shoes in my closet. But a girl needs to match stuff doesn’t she? And now I’m expected to do without some of them. Big sigh!

And then I met three men who had no feet. Okay, let’s be real here. They DO have feet. They are living, breathing walking around men one of whom has a magnificent dog that goes everywhere with him.

What they haven’t got is A HOUSE TO LIVE IN.

Right. They are members of one of the world’s fastest growing communities.

I met them rather reluctantly the other day when I was out walking Boy. Boy is my dog in case you haven’t met us before.

It was early in the morning, 6:30 I think. We, Boy and I, turned left as we left our building. There was no one out there yet, but we are early risers. It was familiar territory. We take that walk every morning of every day and have for a goodly number of years. I was used to being the only person on the street.

But this time there was a difference. Up ahead of me I saw some activity and spotted a rather haphazard looking collection of carts and wagons and three men.

Whoa! What is this presence that is pushing its way into my pristine world I wondered. But, being the insecure kind of woman I am, rather than go investigate, I crossed the street and pretended I hadn’t seen them.

Unfortunately for me, I don’t like not knowing. I had to prove that I wasn’t afraid to walk on my own street just because there was something new and strange happening on it.

So the following morning I girded for battle. I’m not sure exactly what that means but it’s a left over from the same era as the shoes and feet story. Anyway, I went out and once again, and with great determination, headed west.

And sure enough, there they were again. They were sweeping up the area and dusting off the blankets of the previous night’s outdoor sleep over. They folded and chatted and shared one cigarette, and, as I got nearer, they stopped sweeping and moved to the side of the walk so I could pass through without incident.

Happily I didn’t do that.

I stopped and I spoke with them. And I asked them about why they were there – they’d been put out of the park, they said – and they told me they had to leave this place within three days or they would be put in jail. I ask about where they would go and what they would do with all that stuff they were moving around.

But they smiled politely, said they had no idea where they would, or even could, go. What I could see was everything they still owned in the world so they had to move it to someplace safe or the police would confiscate it when the men were sent to jail.

They said it quietly with a wry grin every now and again, but always with a note of hope. That was the thing that got to me finally….that note of hope. What could they hope for?

They were all past the age where companies would be vying for a chance to hire them. They couldn’t even clean up or iron their shirts so they would make attractive petitioners.

The only word of complaint I heard, and it wasn’t said for my benefit really, they were just sort of thinking out loud. “Sometimes it’s tough. We worked long and hard to end up here,” one said and the other muttered agreement and went back to sweeping.

I went back to walking Boy who’d been sitting very still, watching that beautiful, big, long haired German Shepherd, who was totally silent and never moved a muscle that I could see.

I went back to my apartment and gathered up three bottles of water and a couple of bucks and walked back up, and handed them to the men. There was none of that artificial “no thanks, we’re fine,” kind of conversation. They accepted what I had to offer – which wasn’t much, and said thank you. I went back home and they went back to packing stuff. I stopped back later with a box of dog chews.

I saw them again today. It was D Day. D as in DEPART. They had to leave. They didn’t know where they were going. They said they’d probably be back around some time and they’d look for me. And the big beautiful dog came over and jumped up and licked my face and the man holding his leash told him to get down and he did. But that felt good, that moment when the dog spoke to me.

Later, I walked past the spot where they had stayed for three days. There was no sign they had ever been there.

I came home again and looked around, and nowhere in my heart could I find the nerve to complain about what I was giving up. I, who had all this “stuff” to give or take, was the woman with 46 pairs of shoes and I had just encountered the men who had feet, but no table to put them under.

Just to prove there is still beauty in the world, I have chosen this photo from among the fantastic selection Bobill Weaver provided for my use to make this Blog sparkle. I have entitled it:

RAPTURE FOR A RAPTOR. 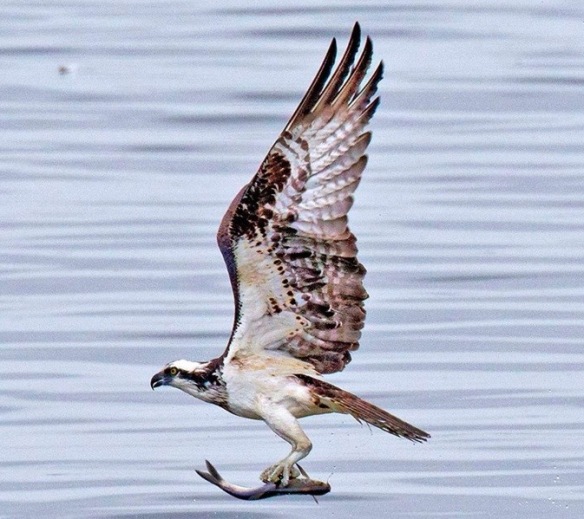 You can practically hear the wind ruffle his feathers as he sails across the water on skis made of – well , yes – tonight’s dinner.