I’m slowly figuring out the blogging world – and one great blogging concept is The Guest Blogger. As soon as I heard about this, I know I wanted one.

Among the many qualities that define the college experience, there are two that usually resonate louder than most within the average college student: it is a time made up of limited responsibility…and infinite freedom, a triumph of our upbringing that my friend Steve and I celebrated routinely.

Like many weekends during my college years, Steve and I found ourselves in Philadelphia visiting my uncle and enjoying the cornucopia of cheesesteaks and cheap (relative to DC) drinks. On one such occasion, we were joined by my 86-year-old Grandmother – “Grammy” as she is known to my family, my friends and me.

There was an unspoken competition during those halcyon days concerning whose grandmother was ‘cooler’. Steve and I were no strangers to recognizing and taking advantage of opportunities, and we saw my Grandmother’s visit as one. What better way to settle the debate over ‘whose grandmother is cooler’ than a night on the town with Grammy.

We followed the typical structure of a ‘night out’. We ate some greasy food, pre-gamed (Where you imbibe a little before you go out to ease the stress on your wallet and bar tab), and then set off. The night was off to a great start. We even ran into some folks we knew from DC and invited them with us to join in the adventure – this might have been a bit of a self-serving gesture. We needed witnesses to corroborate that my grandmother was cooler than [yours]. This is where things started to take a turn…

We were used to people not returning calls or confirming plans so we started off by going with our compatriots to a few local spots while we waited for Grammy to call. Around midnight I began to think she wasn’t going to call. Maybe she was tired and wanted to stay in? She was 86 after all. We decided to turn it up a notch and go to a few more spots.

At 1 AM I receive a text message: “Knock; 225 S 12th St, Philadelphia, PA 19107. I’ll be there in 20.” I handed the phone to Steve. We exchanged glances as if to say: “are we really doing this?” Bars in DC close at 2 so we were already thinking about winding down. We consult the group and after very little deliberation, off we went to Knock where we would join my grandmother and her large group of friends.

We approach the door at 225 S 12th Street and are greeted by a nice bouncer – rare in these areas. He took my ID and said, “Oh, you must be Betty’s grandson. Right this way” and we were taken back into a private area of the lounge. It was absolutely packed with who I now refer to as my 30 Philadelphia Gay Uncles – turns out we were in the aptly named Gayborhood of Philadelphia. Grammy was nowhere to be seen. I glanced ahead and as the crowd shifted, a small seated figure at the head of the room appeared. Grammy seemed to have been holding court as everyone had just finished greeting her and singing her praises.

It was late and we had already been out since 6 – as, apparently had Grammy –  that evening. We needed to slow down. We took our places at one of the lounge table adjacent to my grandmother and started chatting with her friends. We each took turns getting up and singing, entertaining Grammy and her subjects. “You make me feel so young” was my choice that evening and the humor and irony behind it didn’t escape me. Finally one of my Grandmother’s friends noticed our cups “ranneth” dry and the four of us were approached by a congruent number of gentlemen who wanted to buy us drinks. My communication skills intact, I was able to  order Crown Royal for my grandmother, Jonny Walker for me and Steve. My two friends ordered Apple-tinis. The room went silent. The hammers on the piano seemed to strike all at once letting out a dissonant chord that seemed to reflect the opinion of everyone in the room.

“Appletinis?!” shouted one of my grandmother’s friends. “you ordered drinks gayer than we are!”

The night went on for another hour or so and Grammy seemed to be getting tired. I wondered if I should get a cab back to the house for the three of us (Grammy, Steve, and myself). A sense of relief came over me and I signaled to Steve that it was about time to wrap up the night. I asked Grammy, “are you okay? should we head home?”

Her response: “No, no, I’m just tired of this bar. Lets go somewhere else”. At that point I knew that my greatest fears had come to fruition. Not only was my grandmother cooler than everyone else’s, but she was cooler than me. I knew my limits. I was spent, but my grandmother was able to vocalize this quicker than I was. “You and Steve should probably head home. You’re not looking well, dear.”

The rest is a blur. The next thing I remember: it is 8 AM and someone is knocking on our door.

“Wake up!” my grandmother shouted through the door. “We’re going to brunch.” I woke up, threw up, threw something at Steve, and we headed to City Tavern – the historical restaurant known for its pewter goblets, plates, and beer (produced from recipes from Washington, Jefferson, Hamilton, and Franklin).

“Do you want one of these beers? Our founding fathers made these!” Grammy said.

We declined as we were a little fragile to say the least. The idea of more made my stomach lurch. My droopy sleep deprived eyes said it all.

I had the coolest grandmother.

I sat back down at the table and prepared to salute Steve with a shaky victorious toast. But what drink to choose? There was a flight of beers – one from each founding father – waiting for me. 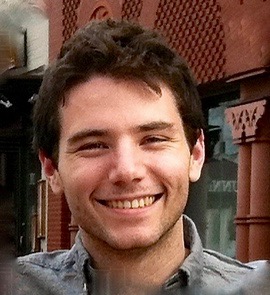